“Untold Stories” is the very first survey exhibition curated by Peter Lindbergh himself. In Turin, the project will be presented at the ARTiglieria Con/temporary Art Center from 13th May to 13th August.

Born in 1944 and raised in Duisburg, the German photographer spent two years working on an uncompromising collection of 140 photographs that will offer a deep insight into his extensive oeuvre, spanning from the early 1980’s to the present day. The exhibition celebrates the legacy of Peter Lindbergh, who passed away in September 2019, while showcasing this master’s highly personal approach to his work.
‘The first time I saw my photographs on the walls of the exhibition mock-up, I was startled, but in a positive way. It was overwhelming to be thus confronted with who I am.’, Lindbergh explained in an interview for the catalogue in June 2019. The show offers an extensive, first-hand look at images that are usually short-lived; being mostly commissioned and published by monthly magazines such as Vogue, Harper’s Bazaar, Interview, Rolling Stone, W Magazine or the Wall Street Journal. Lindbergh’s comprehension of fashion photography was that it can – and should – exist very well without putting fashion in the centre. His images successfully transcend their own context, redefining the parameters of fashion photography and contemporary culture. ‘The exhibition allowed me to reconsider my images in a non-fashion context. The presentation aims to open the photographs to different interpretations and perspectives.’ stressed Lindbergh during the conversation. ‘However, I don’t try to claim that my pictures aren’t fashion photographs, that wouldn’t be true either. I insist on the definition “fashion photography” because for me that term doesn’t mean that one has to depict fashion – photography is much bigger than fashion, it is part of contemporary culture.’

The exhibition is conceived in three chapters. Two large-scale installations bookend the presentation and shed a fresh and surprising light on Lindbergh’s work. Manifest, the monumental opening installation, which features several large-scale bluebacks, was developed especially for the presentation and provides an immersive and thought-provoking introduction to Lindbergh’s understanding of fashion photography.

In the central section of the exhibition, Lindbergh arranged the works he personally considered key to his oeuvre. He experimented with his own material and revealed new stories while staying true to his language. Both, emblematic and never before exhibited works are shown in pairs or groups that give rise to unexpected and striking interpretations.
The exhibition closes with the film installation Testament (2014), which uncovers a hitherto unknown side of the practice and character of the German photographer. Shot through a one-way mirror, the film shows the silent exchange between Lindbergh’s camera and Elmer Carroll. The Florida death row inmate spent 35 minutes looking intently at his reflection – thoughtful, introspective and without significant facial animation. Shown for the first time, the Testament installation adds an unexpected layer to the exhibition and opens a discussion about subjects that were of central importance to Peter Lindbergh: introspection, empathy and freedom.

The exhibition is organised by the Kunstpalast, Düsseldorf in cooperation with the Peter Lindbergh Foundation, Paris.

``With the exhibition, ``Untold Stories`` by Peter Lindbergh, Paratissima inaugurates a gallery dedicated to portraits of great contemporary artists; people whose work will become fertile ground for developing themes and talking points with the public and the art world. In the new setting, major exhibitions will sit alongside projects featuring emerging art, timeless artists and artistic journeys.``
Laura Milani
President of Paratissima

“Peter Lindbergh. Untold Stories” is simultaneously a tribute, a portrait and a self-portrait by the legendary German photographer.

The selection of images was handled by Lindbergh himself, with a long immersion in his archives through forty years of professional and private life. An intimate exhibition, almost an unconscious legacy, which develops like a diary, where Lindbergh tells about himself through the images taken by him. Many famous photographs, many unpublished ones, famous editorials and other secret ones, untold stories, which now, all together, form an enveloping and evocative path. It is the images that create the narrative, telling us about Lindbergh, where words would only fail. They are establishing a direct relationship with the viewer, with an intimacy and a sensoriality that denies the cold and glossy nature of the fashion lens. Lindbergh is a photographer, not just an icon of that revolutionary fashion photography of the early nineties, when he portrayed a group of unknown young models on the street, with barely makeup, dressed in jeans and a T-shirt. They were Linda Evangelista, Naomi Campbell, Christy Turlington, Tatjana Patitz and Cindy Crawford. Really beautiful girls, each with their own personality.

Something completely different from the usual stereotypes. A shot that, as the cover of the January 1990 issue of British Vogue, paved the way for the beginning of the supermodel phonomenon. No one had ever shown them as women, persons, whose radiant beauty goes beyond the pure aesthetic level. The same has been true for anyone who has placed themselves in front of his lens, faces and bodies of actresses, models and actors who reveal themselves in intimate and psychological portraits, deeply human and organic. Natural shots, empathic, without retouching in post-production.

This should be the responsibility of today’s photographers: freeing women, eventually freeing everyone, from the terror of youth and perfection, Lindbergh wrote in 2015 in his book ‘Images of Women II’. An aesthetic and ethical focus on the power of the spontaneous truth of female beauty, which evokes that of the great photographer Eve Arnold, the one who portrayed the divas (and not only) by trying to get to know them as people through her lens. And so she made them both beautiful and immortal.

The pictorial portraits of Lucien Freud also come to mind, who took private confessions out of his models, managing to instill their nature and deepest spirit in the carnality of the body. As with Freud, at times one feels almost embarrassed in front of famous people when one can sense their soul, and one always perceives a certain melancholy. Lindbergh, in fact, said not to look for a smile in faces, because it removes the nuances
and everything that emerges from the features. And it was from the faces he started when he discovered photography, after having been a painter, window dresser and performed other works around the world.
My brother had wonderful children before I became a father and, for some reason, I wanted to photograph them. It was then that I bought my first camera. There is something totally unconscious in children. That’s how I learned, he told the Guardian in 2016.
In his eye and in his compositional sense we find the realism of a certain anthropological documentarism, from Walker Evans, Garry Winogrand and August Sander to Paul Strand and Dorothea Lange (which face has a more poignant beauty than that of the woman who looks at the horizon with her children around her neck, dressed in rags, already old in her thirties, a symbol of the United States exhausted by the Great Depression of 1929?). And we also find the lesson that the street view has to offer, the restless eye that wanders the metropolitan streets and glimpses small sudden events, the masses and individuals, the solitude in the crowd. A vision and an often cinematic shot, that define his work, with moving images, which at times look like frames extracted from a film or refer to the sets of shooting studios and certain genres of cinema, from road movies in the American landscape to science fiction. His characteristic hard and mellow black and white, strongly contrasted, has within the dramatic force of German expressionist cinema, with a direct inspiration to Metropolis, a visionary masterpiece of 1927 with which Fritz Lang created a manifesto of accusation against the nascent mechanized and dehumanizing society. A familiar atmosphere for Lindbergh, who grew up in Duisburg, an industrial town in West Germany. As paradoxical as it may sound, I find black and white often more authentic than colour. Portraits in particular appear stronger by the reduction, he told. Also on display is a short film by Lindbergh, Testament of 2013, where the photographer paints the portrait of Ermel Carrol, a death sentence inmate in Florida. The camera remains open in front of his face for 30 minutes, becoming a mirror in which author, subject and audience overlap in a conversation that, even here, does not need words.

Another untold story that is revealed in silence, allowing everyone to find their own truth.”

Known for his memorable cinematic black and white images, Peter Lindbergh pioneered a form of new realism by rede ning the standards of beauty. His honest approach set him apart from the other photographers as he prioritizes soul and personality. Lindbergh drastically changed the standards of fashion photography in times of excessive retouch- ing, believing that “beauty is having the courage to be yourself.”

In the late 1980’s, Lindbergh garnered international acclaim and launched the careers of a new generation of models, by photographing them successively in white shirts, with barely make-up on, and soon after on the streets of New York for the January 1990 issue of British Vogue. Considered by many as the “Supermodels birth certi cate”, the now legendary cover launched the career of the likes of Linda Evangelista, Naomi Campbell or Tatjana Patitz.

Lindbergh was the rst photographer to include a narrative in his fashion series, and his storytelling introduced a new vision on fashion photography. His work is best-known for his singular and revealing portraits and strong in uences from early German cinema and industrial surroundings of his childhood spent in Duisburg, North Rhine-Westphalia.

Since the late 1970’s, Peter Lindbergh has collaborated with all the major fashion brands and magazines including the American and Italian editions of Vogue, Rolling Stone, Vanity Fair, Harper’s Bazaar US, Wall Street Journal Magazine, Visionaire, Interview and W. His work is part of the permanent collections of numerous ne arts museums and his photographs are regularly exhibited in prestigious institutions around the globe, among which the Victoria & Albert Museum (London), Centre Pompidou (Paris), MoMA’s PS1 (New York), Hamburger Banhof (Berlin), Bunkamura Museum of Art (Tokyo), the Pushkin Museum of Fine Arts (Moscow) and most recently Düsseldorf’s Kunstpalast. 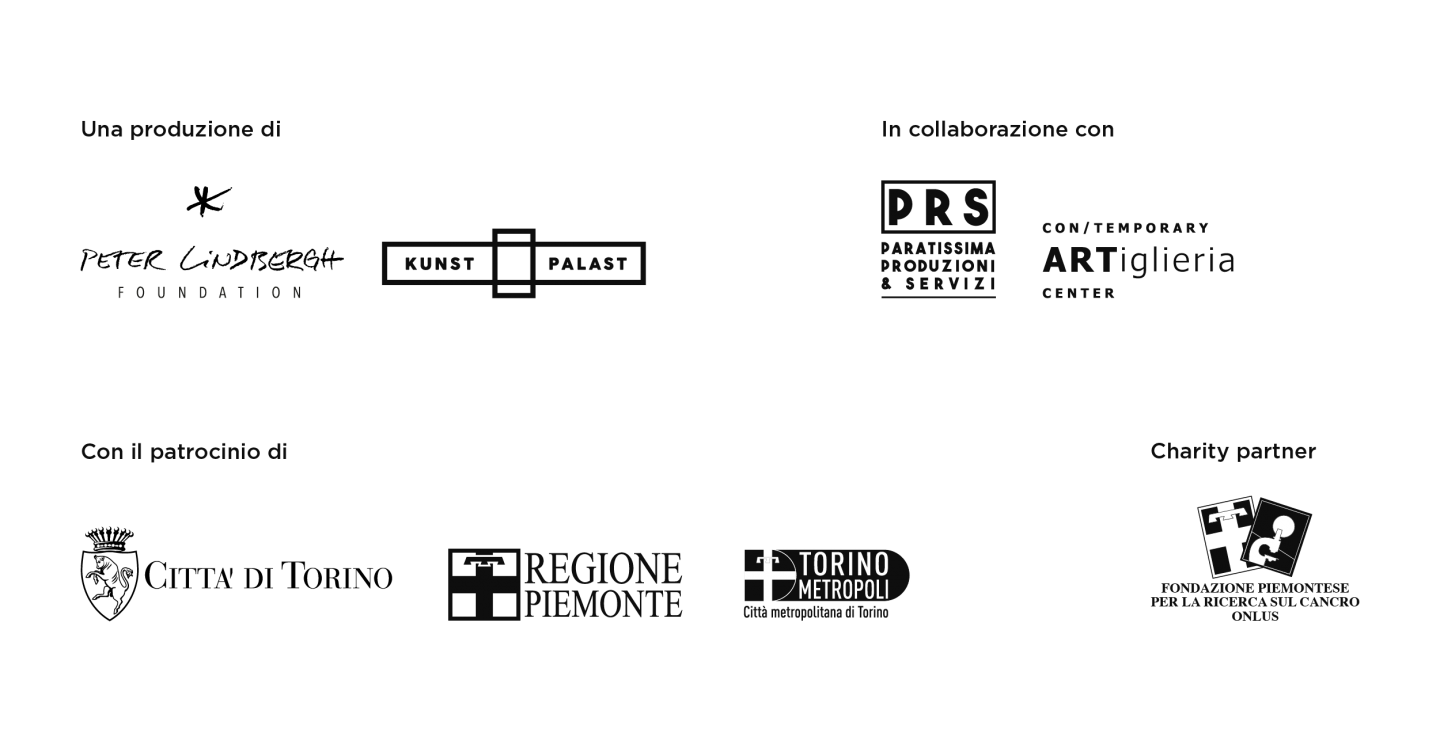